EMP Museum’s battle of the bands ready to kick off It’s that time of year again.

The EMP Museum’s Sound Off! Battle of the Bands, which showcases 21-and-under groups, kicks off its annual battle on Saturday (Feb. 13) with Woodinville’s Copalis, Seattle’s COSMOS, Vancouver, B.C.’s, Jazzy Tee and Lake Forest Park’s Party Shark duking it out in the semifinals.

The winning band gets to perform at Bumbershoot. In addition, one finalist will be selected to play at Sasquatch! Music Festival, two semifinalists at Timber! Outdoor Music Festival, the audience favorite at a KEXP community-based show, and third and fourth place will perform at Northwest Folklife.

EMP Museum received more than 100 applications from across the Northwest for the 12 spots in Sound Off!, said Liz Young, the museum’s audience-development program producer.

“It’s just an incredible foot in the door for these artists,” she said.

Just ask one of last year’s finalists, Emma Lee Toyoda, 19. Since winning third place overall and fan favorite in the semifinals and finals, she has performed at Western Washington University’s Earth Day Festival, Northwest Folklife and the Timber! Outdoor Music Festival, among other events. In March, she will sing at Hollow Earth Radio’s Magmafest.

“Before Sound Off! I didn’t even have a band really, it was just me writing songs in my basement and putting it online,” she said. “It gets young bands to get their acts together and pushes them to strive for something more.”

Her band — which she describes as indie-folk and is also called Emma Lee Toyoda — is working on its first album.

The second and third rounds of the semifinals will take place on Feb. 20 and Feb. 27, with the finals scheduled for March 5. Each round will include a panel of industry judges. Past panels have included Sound Off! alumni, local journalists, artists and record-label representatives.

Toyoda said that it was especially helpful to learn from people already established in the music industry, like Timber! Music Festival’s organizer Kevin Sur.

“Him being a musician himself, and having all this touring experience and all the band experience; just to share that with younger bands finding their way is helpful,” she said.

Over the past 15 years, the competition has helped to launch the musical careers of The Lonely Forest, Sol, Brothers from Another and Tomten.

Despite being a “battle,” Sound Off! is so much more than a competition; it is family, Toyoda said.

“It’s a chance to get to know young bands and network and really just grow as a band and as a musician,” she said. “I’m going to be looking back on it when I’m older and be like ‘those were the days.’ It’s a very happy time for everyone involved and a lot of excitement all around.” 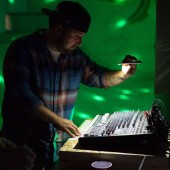 Been pretending to care since the 80's. Kama Sutra Expert. All of the staff member's mothers have my phone number on speed dial. You know why!